Marylebone is one of the most prestigious and well-to-do areas of London and is well-known for being one of the most distinctive shopping destinations in the city. Located just a few minutes away from the busy and bustling Oxford Street, Marylebone offers a very different type of experience with a wide range of luxurious shopping, lifestyle, and dining experiences in a picturesque setting. The attractive green spaces and period architecture provide a feel that seems miles away from the busy city that it is right at the centre of.

Marylebone High Street runs through the heart of the area, offering a vibrant row of shops, restaurants, and cafes including some of the most well-known and famous names in the area. There are plenty of quieter roads that join onto Marylebone High Street, including Moxton Road, which is a famous destination for food lovers and home to some of the best restaurants in the capital. Marylebone Lane is a destination filled with small independent shops and cafes, and you’ll find a mix of different specialist retailers along New Cavendish Street.

At Marylebone Village, you will find a unique combination of smaller independent stores and boutiques alongside larger and more established brands, many of which have been a part of the community for decades, while others are dynamic newcomers to the area. Most of the businesses here share a common approach to excellent quality and a personal level of customer service that you will struggle to find elsewhere.

Marylebone is home to a wide range of different lifestyle and cultural activities that both residents and visitors can enjoy, from exercise classes to art exhibitions. Many of the shops and restaurants host interesting events, talks, promotions and masterclasses on a regular basis throughout the year including the Marylebone Design District and Marylebone Food Festival.

Where is London Marylebone Train Station?

London Marylebone Station opened in March 1899 where it served as the capital terminus of the Great Central Main Line. It was the last major railway station to open in Britain for over a century and linked the capital to various other cities around the UK including Sheffield, Manchester, and Leicester. London Marylebone is one of the smallest line termini in London since it opened with just half of the platforms that were originally planned. Since 1907, there has been an interchange with the Bakerloo line.

How to Get to London Marylebone Station?

What Line is Marylebone On?

What Zone is Marylebone Station?

Marylebone Station is a central London underground station located in Transport for London fare zone 1. You will be able to travel using the same-day ticket in all Zone 1 locations, however, fares may vary if you travel between zones. All of central London is covered by zone 1, but London itself is made up of six zones. It is important to check which zones you are going to be travelling in if using the London underground since fares and ticket prices can vary significantly depending on the zones that you travel through. You can use the Transport for London bus service in all six zones using the same Travelcard.

Does Marylebone Station Have a Lift?

Marylebone Underground station has escalators and steps that can be used to access the platform, along with a bridge across to trains travelling in the opposite direction. At London Marylebone Station, there is wheelchair-friendly, flat access to all platforms, and a ramp available for train access. Staff assistance is available on request.

Is Marylebone Station in the Congestion Zone?

If you are planning on driving to Marylebone Station, it’s important to be aware of the London Congestion Zone, where drivers must pay £15 as a daily toll for using the roads in the city centre. Most disabled drivers, motorbikes, mopeds, bicycles, and cars that are exempt from paying road tax will be exempt from paying the congestion charge. You can pay on the day, or pre-pay online or over the phone. There is also the option to pay your congestion charge later, with up to three days to make your online payment, although this does incur a small extra fee.

Marylebone is also in the Ultra-Low Emissions Zone, which is an additional charge for certain vehicles and is in operation 24 hours a day, every day except for Christmas Day. Petrol and diesel cars, vans, minibuses, motorcycles, mopeds, lorries, coaches, and other large vehicles may be affected by the ULEZ. You can enter your registration number on the Transport for London website to see if your vehicle is affected. The daily ULEZ charge is £12.50 for most vehicles and £100 for heavier vehicles including lorries, buses and coaches. The charge also applies to the owners of non-UK registered vehicles if the vehicle does not meet the emissions standards.

If you are considering moving to the Marylebone area, you may be entitled to a 90% discount on the congestion charge as a resident. To be eligible for this discount you will need to be a registered resident within the congestion charge zone. You can check where the zone begins and ends at the Transport for London website or lookout for the ‘C’ signs in red on the roads. Residents who are registered for the resident’s congestion charge discount are eligible for a time-limited grace period where a 100% discount from the ULEZ will apply. Registered keepers of disabled or disabled passenger vehicles benefit from a grace period from ULEZ that allows them to be exempt from the charge until October 2025 as long as the tax class of their vehicle does not change. London taxis are currently exempt from ULEZ charges, subject to a 15-year vehicle age limit.

If you are arriving at the station by car and want to find somewhere to park, there are several options to consider in and around Marylebone. Along with Hyde Park and Fitzrovia, Marylebone comes under Westminster Council’s Parking Zone F and is in sub-zone F3. While some street parking is available, it is often reserved for residents and pass holders, and finding a parking spot throughout the day as a visitor can be difficult. Residents’ parking bays are controlled between 8:30 am and 8:30 pm every day, including bank holidays. On-street pay-and-display parking spaces are controlled between 8:30 am and 6:30 pm. Certain residential parking areas are controlled 24/7.

Alternatively, you may want to look for off-street parking where it is often easier to find a space compared to parking on the road. National Car Parks has several car parks in the Marylebone area including Regents Park, which offers sixty-five car parking spaces and two disabled bays. The car park is open 24/7 and prices start at £7 for thirty minutes. Harley Street Car Park, located at 6-7 Weymouth Mews, offers thirty parking spaces, but there are no disabled bays available. It is open from 7 am to 7 pm Monday to Friday online, and prices start at £10 for an hour. The largest car park in the area is Portman Square Car Park at Hyde Park, which offers 439 parking spaces and three disabled bays. It is open 24/7 and parking prices start at £10 for an hour.

Marylebone is a super upmarket area of London with plenty of things to see and explore. Whether you’re driving, on foot from the centre of London, or arriving on the train or tube, getting around here is easy. 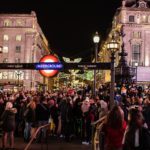 What to buy in Covent Garden
How can we help?
Book a Valuation
Send this to a friend