Looking at properties to rent in Soho? Let’s make the already interesting neighbourhood a little more intriguing with these factoids. Our Marketing Team have put together a few things you might find interesting…

Turns out the iconic composer lived in Soho for a year. He is believed to have composed Symphony No.4 in D Major at a house on Frith Street during his tour of Europe in 1764. Mozart was about eight years old at the time and already a recognized prodigy. While London was not initially on the Mozarts’ plan, the family decided to cross the Channel after requests from fans enraptured by the boy wonder’s unbelievable talent.

The Seven Noses of Soho

The streets of Soho feature seven noses. Before your mind races to Jack the Ripper, let’s tell you that the noses are in fact stone sculptures by artist Ricky Buckley in protest of the arrival of CCTV in London. You have to look high up on walls to spot six of the seven, including a few placed above strip clubs. The other nose is more discreet, located halfway up a wall in Meard Street.

London has the Europeans to thank for introducing them to a beverage that has come to occupy an important part in our lives. The city’s first coffee shop, Bar Italia on Frith Street, was also the site of the first public demonstration of the television. If you’re looking for flats to rent in Soho and walking around 22 Frith Street, you can spot a blue plaque commemorating this demonstration on the front door of the building housing Bar Italia.

The small street, once known as Rose Street, is named after a character from Charles Dicken’s famous novel A Tale of Two Cities. The author wrote that the street had a golden arm, which you can spot above Goldbeater’s House, a commercial building located near Oxford Street and Tottenham Court Road. Manette Street was also an anarchist hub in the 19th century and the radical folks who congregated here created a great scare among the genteel society of that time!

The cigarette brand is named after a thoroughfare in Soho. Great Marlborough Street was the first production centre for Marlboro cigarettes, which were originally targeted at women.

Greater London Properties are Soho’s only shop front estate agency and with intricate knowledge of the area we would be delighted to advise on properties to rent or buy in Soho. Give our Soho Branch a call today on 0207 734 4062.

Eat, Shop and Be Merry at the Marylebone High Street 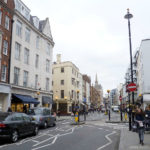 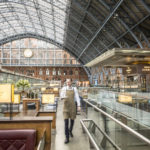 Eating Out? Look No Further Than Kings Cross..
How can we help?
Book a Valuation
Send this to a friend