The only thing hotter than London’s scorching heat is its spectacular summer music London festival scene. Over 20 major festivals are planned for this year. The line-up for music festivals in London 2019 look poised to attract revellers in large numbers.

What’s on at Hyde Park?

British Summer Time (BST) by Barclaycard is a series of mini festivals starting 5 July and ending 14 July. Over ten days of entertainment, you’ll have the opportunity to catch some of the top artists at Hyde Park. Also on the line-up are some talented local acts.

BST was first held in 2013, and starred the Rolling Stones, Jon Bon Jovi, Lionel Richie and Jennifer Lopez. This year, the who’s who of top ticket names include Celine Dion (who will be kicking off the festival), Bob Dylan, Florence and the Machine, Robbie Williams, Neil Young, Barbra Streisand, Stevie Wonder, and The National. Neil Young’s joint-headline gig with Bob Dylan will not be sponsored by Barclaycard, a decision that came about after the singer – who is an avowed environmentalist – criticized the festival’s choice of sponsor, for their funding of fossil-fuel companies.

Ticket prices vary depending on each event. The Gold Circle/Premium View will cost you £169.95. The VIP Summer Garden, The Terrace and Diamond Circle tickets are priced at £249.95. They are on sale at the festival’s website, and on Seetickets, AXS and Ticketmaster.

All Points East at Victoria Park

All Points East at Victoria Park returns for a second year. The ten-day event commences on 24 May and ends on 2 June. Attendees can enjoy various genres of music from an impressive line-up, with headliners including The Strokes, Christine and the Queens, The Chemical Brothers (headlining the opening night), Mumford & Sons, Bring Me The Horizon and Bon Iver. Over the two weekends, you can also let your hair down to James Blake, Hot Chip, First Aid Kit and Primal Scream, to name a few.

All Points East, sponsored by AEG Presents, also features four days of free entry and community activities, called In the Neighbourhood. Among them are outdoor cinema screenings, and this year, event organisers invited local residents to vote for the films. Votes poured in for family-friendly films including E.T, Mary Poppins, Back to the Future, The Greatest Showman and Black Panther.

Adding variety is MoreYoga, which will be offering free sessions for people of all ages and abilities. Also on the cards are aerial circus performances from Upswing, a craft beer fair, pop-up tennis courts and story-telling from Museum of London Docklands. There will be open dance sessions for folks between the ages of 14-84, featuring styles ranging from jive and swing to salsa and lindy-hop. The festival has partnered with more local providers than last year, so you can expect a vast choice of food traders and bars.

Located south of Brixton, South London, Brockwell Park, attracts nearly 4 million visitors each year. It has a history of holding large festivals and music events, including Sunfall Festival 2017 and Found Festival 2016. The park has a history of hosting large-scale events, notable ones being the Rock Against Racism carnival in 1987 featuring Elvis Costello and The Attractions, which was attended by an estimated 150,000 people. In 2002, Australian rock band Midnight Oil – the headline act at the Fierce Festival – played to an audience of 20,000 fans. The festival’s Purple in the Park dance event, featuring performances by Yoko Ono, Grace Jones and Boy George, had a capacity of 50,000.

This year, the park will serve as the setting for Cross the Tracks, which is scheduled for 9 June. The festival will feature a medley of music genres, including funk, jazz, electronic music and classic Motown soul. The line-up boasts such names as Chaka Khan, Martha Reeves & the Vandellas, Masego and Jordan Rakei, among several others. It promises to be interesting experience as you groove to legendary artists and the music of upcoming stars. Street food and craft beer will be available on site.

The other festival at Brockwell Park is Mighty Hoopla, a one-day event on 8 June, which will be headlined by Chaka Khan, and feature acts by All Saints, Bananarama, Kate Nash, Liberty X, movie choir Some Voices and Savage Disco (among others), and Ru Paul’s Drag Race All Stars’ winner Trinity The Tuck. The festival has received rave reviews from the Guardian. It is recommended if you’re in the mood for unabashed fun and a colourful time. 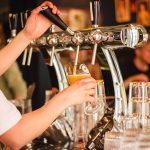 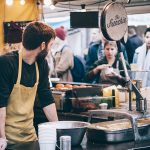 Best Food Festivals In London 2019
How can we help?
Book a Valuation
Send this to a friend