Where Can I Watch The World Cup In London

As Central London’s Estate Agent, GLP feel it is only right we provide you with some excellent venues  where you can watch the World Cup 2018 this summer.  Here is a list below of some of the hot spots..

Where to watch the World Cup in London,

BIG EASY, COVENT GARDEN AND SOHO: All games will be screened on 55-inch TVs at Big Easy restaurants, and a World Cup menu has been specially created including hot dogs, chilli dogs, fries and Big Easy brews.

WAXY O’CONNORS, SOHO: Irish pub Waxy O’Connor’s on Rupert Street has screens in every room of the six floor, four bar, venue. You can make a reservation for drinks or for food — think pies, burgers, fish & chips.

JERUSALEM, FITZROVIA: Jerusalem Bar & Kitchen says it will be showing all matches, but you’ll have to book ahead for one of the special deals — burger and beer for £10, or eight bottles of beer for £20

PIANO WORKS, FARRINGDON: Usually a music venue, Piano Works pauses the microphone to screen these matches, with offers going on during play, including cocktail hour, and special deals when a yellow or red card is given out — hopefully there’s another Battle of Nuremberg to take advantage of. Booking recommended.

THE WARWICK, PICCADILLY CIRCUS: It doesn’t get much more central than Piccadilly Circus. This pub just around the corner will be screening a selection of matches — check whether they’re showing your team.

BUD BOAT, THE THAMES: Get a knot in your stomach watching England? Well now you can blame it on seasickness, if you opt to watch the games on Budweiser’s Bud Boat. Tickets cost a tenner and come with a beer, and you’ll stay on the cruise for five hours in total (don’t worry there’s stuff to do on there pre and post match).

SWINGERS: Fed up with the rowdy crowds? Watch the footy from the comfort of your own private room at Swingers West End. It’ll cost you, mind — £80 per person, although that includes food from Made of Dough, Hackney Gelato and others — plus buckets of beers on arrival. Maybe one for if when England are in the final.

So now you know where to watch the World Cup in London, all we need now is some exciting results!

If you ever need some good local Central London area knowledge look no further than our team of experts at Greater London Properties, 0207 734 4062.

How Many Sex Shops In Soho? 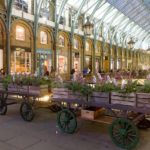 New Restaurants In Covent Garden
How can we help?
Book a Valuation
Send this to a friend